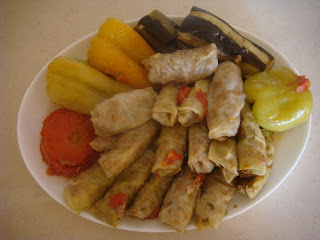 Ingredients:
1. Put kilo minced beef in a bowl, then you add one cup of washed rice and minced onion.
2. As you mix them together also add a tablespoon of tomato paste
3. a tablespoon of dry basil and savory
4. 150 grams butter
5. black pepper and salt.
6. Add half a cup of warmish water.
Preparation:
Then start to knead the stuff either with spoon or hands for 10 minutes.
Once the needed stuffing of dolma is ready, take a grape leave put a tablespoon of the stuffing on it and roll it. After rolling the grape leave dolmas put them in a saucepan, add a tablespoon of vegetable oil and some water to cover it and cook for 20 minutes.  You can prepare the same with cabbage leaves.

Summer dolma is made of stuffed eggplants, pepper, tomatoes.

“Pasuts” dolma, as it is served as vegetarian dish for fasting does not use any kind of meat.  Instead it uses beans, peas, rice, lots of other spices cooked in oil and stuffed in sour cabbage.  “Pasuts” dolma is usually quite big in size, and one would be enough for normal portion.

“Sut” dolma is made of rice, oil and spices.  Since it is stuffed in grape leaves, it looks like real grape leave dolma, but there is no meat; that is why it is called “fake”.  It is very tasty, and even though takes long time to prepare, one eats it really quickly, like sun-flower seeds 🙂

Real grape leave dolma is usually served with matsoun – Armenian national sour yoghurt and garlic. Dolma is a very popular traditional Armenian dish usually prepared for festive tables such as New Year or just for special guests. In different regions of Armenia people cook dolma with specific change of ingredients, like Ashtarak and Echmiatsin dolma are made of lamb. In Ashtarak they often make dolma by stuffing apple and quince.