Skip to content
Swedish cuisine has several important regional differences. In the north they usually eat pitepalt (potato dumpling filled with pork). In the interior nyponsoppa is very popular, a fruit soup made of rose-hip. This meal is served cold with almonds as a dessert. One of the best known Swedish dishes is Pytt I Panna, also known as Swedish fry. It looks delicious and is a common plate in Sweden. 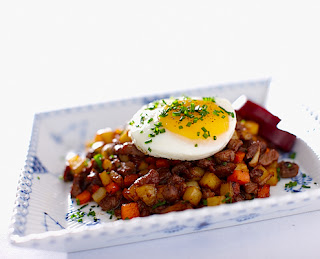 You’ll need:
1 lb (500 g) peeled potatoes
1 lb (500 g) boiled beef
8 oz (250g) boiled ham
2 tbs butter
2 tbs oil
3 tbs chopped onion
Salt, black pepper
1 tbs chopped parsley
Eggs
First cut the potatoes, meet and ham into small cubes.
Heat butter and oil in a deep skillet and cook the potatoes on a medium heat for some 15 minutes. Remove from the skillet and leave to dry. Then cook the onions until they become transparent, add the cubes of meat and cook over a higher heat for 10 minutes. Put the potatoes back in the skillet and heat. Season the dish with pepper, salt and sprinkle with parsley.
Swedish fry should be served on plates with a fried egg placed in the middle of each portion.